The US Newsweek, which went public on December 24, 2007, featured "Whats Next: China" as the cover story, pointing out that China's becoming a global superpower is no longer a prediction, but a fact. Most countries and regions regard 2008 as the year in which China has leaped to the center of the world stage. The Olympics is Chinaâ€™s long-awaited party.

So far, China has contributed a lot to the growth of the global economy. Whether it is in trade, warming, Sudan, Darfur or North Korea, China has become a new key factor. Without it, it is impossible to reach a permanent solution.

However, for Chinese exporters, 2008 will be a challenging year. The trade frictions encountered by China have extended from the micro level of products and enterprises to the macro-system and policy levels, and the international trade environment has become increasingly severe. China has been the country with the most anti-dumping investigations in the world for 12 consecutive years. Currently, one third of the world's anti-dumping investigations are directed against China.

China's foreign trade continues to grow at a high rate, and the surplus is too large, which has led many foreign media to frequently create a variety of "China threat theory." The recent "threat theory" of Chinese product quality and food safety is outstanding, for example, on July 18, 2007. The US Consumer Products Commission announced the recall of six Chinese products with safety issues, including flashlights, air pumps, microwave ovens and children's shoes. On July 19, 2007, the Philippine Food and Drug Administration was from the White Rabbit Toffee produced by Shanghai Guanshengyuan. The carcinogen formaldehyde was detected. Some voices that advocate the protection of national interests and the invasion of foreign capital are also on the rise. The United States, the European Union, and Russia have adjusted their trade policies toward China this year. Developing countries are also worried about the growth of China's trade.

Like other export industries in China, lighting lighting products are labor-intensive products. They have long been winning at a low price and have a single model. They neglect the construction of the industry's own soft power and cannot participate in the formulation of international trade game rules. In 2008, waiting for China's lighting and lighting companies is not a Kangzhuang Avenue, but a slogan, we need to cross from the beginning.

However, under the global trend of energy conservation and environmental protection, the EU attaches great importance to environmental protection issues. In March 2006, EU member states signed an environmental agreement. In two years, European countries will gradually replace energy consumption with energy-saving fluorescent bulbs. Vintage incandescent bulbs to reduce greenhouse gas emissions. At present, the local products of the EU countries can only meet the market demand of 25%, and the prices are generally expensive. These positive factors have promoted the export of China's energy-saving lamps.

Subprime crisis affects the US market

The subprime crisis that swept the global capital market caused by the bankruptcy of the second-largest subprime mortgage company in the United States in April 2007 led to financial market turmoil and slowed US economic growth. According to the latest estimates of the American Association of Mortgage Bankers, 30% of Americans who received a press in 2006 may not be able to repay their loans in time.

Since the United States is the largest export destination of Chinese lighting lighting products, it accounts for a quarter of the total export of China's lighting products. The US economy is largely driven by consumption. The subprime crisis has hit the US consumer market. The consumer confidence index of the US consumer market has been falling all the way down, from 105.6 in August 2007 to 88.6 in December. .

As the dangerous effects of the subprime crisis will be gradually released between 2008 and 2010, it is expected that in 2008, Chinese lighting companies with the US as the main export market will face a reduction in orders.


DOUBLE SIDE THERMAL ADHESIVE TAPE make of thermal PSA having a better adhesion and efficient thermal conductivity. Mainly be used in LED industries.

â™¦ It is available to use high/low temperature, severe environmental conditions. Even if bonding on uneven surface, thermal conductivity is good. The most important is that it is used easily without changing your machines.

â™¦ It provides good solution when you need good thermal conductivity, insulation and damping. Based on getting certificates SGS, many customers applied our product to electric products. 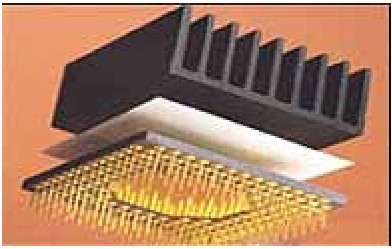 2.For any power consumption semiconductor

4.Fixing heat sink on the power supply circuit board