Abstract: This paper introduces the structure and working principle of the auto cruise control system, and selects the PID control strategy based on Atmega 8 microcontroller to realize the stable driving and acceleration and deceleration control process of the vehicle. The system can effectively reduce the working intensity of drivers in long-distance driving, improve comfort, and reduce fuel consumption, which is conducive to environmental protection.
Keywords: automatic cruise; PID; Atmega 8

0 Introduction According to the survey, 10% of traffic accidents are caused by fatigue driving and improper operation. The automatic cruise control system described in this paper can effectively reduce driver fatigue, avoid traffic accidents, and benefit the environment. When driving on the expressway for a long time, after opening the automatic control switch of the system, the cruise control system will automatically increase or decrease the throttle opening according to the driving resistance, so as to prevent the driver from frequently stepping on the accelerator pedal to keep the driving speed of the vehicle constant. The fatigue strength of the driver is greatly reduced. Since the cruise control system can automatically maintain the vehicle speed, unnecessary artificial changes of the accelerator pedal are avoided, thereby reducing fuel consumption of the automobile and exhaust gas emissions. 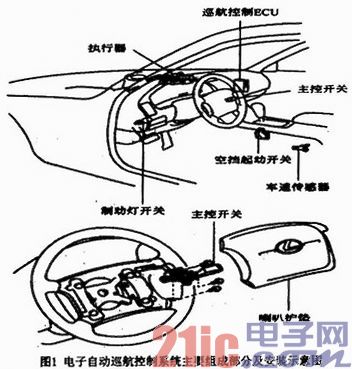 3 Selection of control algorithms for car cruise system
As the earliest developed control strategy, PID control has the advantages of simple structure, good robustness, high reliability, easy parameter setting and so on. Therefore, the PID algorithm has the widest application in industrial control. This design selects the PID control strategy to achieve the fixed speed function of the cruise system.

4 Hardware Design Overview The auto cruise system input volume described in this article: actual vehicle speed, throttle opening, engine speed, brake switch (the system setting is the set speed when the brake switch is active). The Atmega 8 microcontroller is selected as the control core, and the actuator uses a DC motor. The control process is as follows: the set speed and the actual vehicle speed input and comparison are deviated. The PID algorithm is used to adjust the signal after the other input is processed. The Atmega 8 MCU PWM channel drives the DC motor speed to change the air door opening degree to realize the vehicle speed. control.
For safety reasons, the brake switch is directly connected to the throttle actuator in the hardware design, so that when the brake pedal is depressed, the cruise control system and the throttle cable are disconnected while stopping the constant speed control program of the single chip microcomputer. open.
The system hardware circuit is mainly composed of a microprocessor, a power supply circuit, a clutch and a DC motor drive circuit, a protection circuit, an A/D conversion circuit, and an input signal processing circuit. The Atm ega 8 microprocessor is the heart of the system. Sensors are used for signal acquisition in many places in the car cruise control system. The required sensors mainly include a vehicle speed sensor, a throttle position sensor, a brake pedal sensor, and a clutch pedal sensor.
The speed signal collected by the vehicle speed sensor is one of the most important input information of the vehicle cruise control system. The vehicle speed sensor converts the collected vehicle speed analog signal into digital quantity and sends it to the cruise control ECU. As a feedback signal, the output signal is generated after comparing with the set value, and the actuator is driven to meet the control requirement. The requirements for the speed sensor are real-time, accuracy and reliability.
The function of the throttle position sensor is to collect the throttle position signal. In the system, the throttle position measurement uses a potentiometer type angular displacement sensor, and there is an A/D conversion circuit between the sensor and the microprocessor, and the voltage signal outputted by the sensor is first converted into a digital quantity, and then processed by the microprocessor. .
The brake pedal sensor is mounted under the brake pedal and is used to obtain a brake pedal action signal to determine whether to exit the cruise system.
A clutch pedal sensor is mounted under the clutch pedal for obtaining a clutch pedal actuation signal.

5 system software process cruise control process shown in Figure 4. In the automotive electronic cruise control system, the actual vehicle speed signal is fed back to the electronic controller and compared with the set vehicle speed. Therefore, the system works in a closed-loop control mode, and the control method adopted is an incremental PID control strategy. By programming the MCU to adjust the speed of the DC motor and the opening of the throttle, the vehicle speed remains stable within the allowable error range. 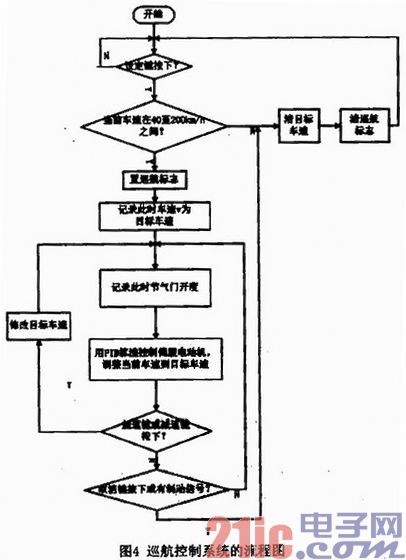 In order to clearly explain the software design of the auto cruise system, the following describes the composition of the software programming part of the single-chip computer from the modular point of view. The modules involved in the single-chip programming mainly include the initialization module, the keyboard scan module, the start judgment module, the communication module, the interrupt module, and the timing module. , watchdog module, etc.
The system detects whether there is a button press. When the cruise switch is turned on, the start determination program determines whether the vehicle speed signal obtained by the vehicle speed collecting program is within the cruiseable range. When the setting button is valid, the actual vehicle speed needs to be maintained at this speed. . The timing block realizes the timing, and the interrupt occurs when the timing time is reached. The actual vehicle speed is compared with the set value. If the difference does not operate within the error tolerance range, if not, the motor speed control block is entered to realize the vehicle speed setting. When the acceleration or deceleration button is detected, the vehicle speed setting value is first modified, and then the motor speed control block is entered to achieve acceleration or deceleration; when the brake switch is detected to be turned off, the cruise control system is exited.

6 Conclusions This paper combines the PID control algorithm with the Atmega 8 microcontroller to apply to the research of the auto cruise control system, effectively realize the stable driving of the vehicle within the error tolerance range, and can reduce the labor intensity of the driver during the long driving journey. Thereby reducing the occurrence of traffic accidents. It also makes the PID control algorithm more widely used in automotive electronics.

ridging machine for Agriculture can improve the ground temperature and increase the air permeability of the soil, and our ridgers are versatile and used in farm land which is welcomed by ploughing farmers for its plurality of unique advantages. These ridging tractors are of small resistance and high efficiency. Our ridging machine also has advantages of racing against time, saving labor, working efficiency and low cost etc. 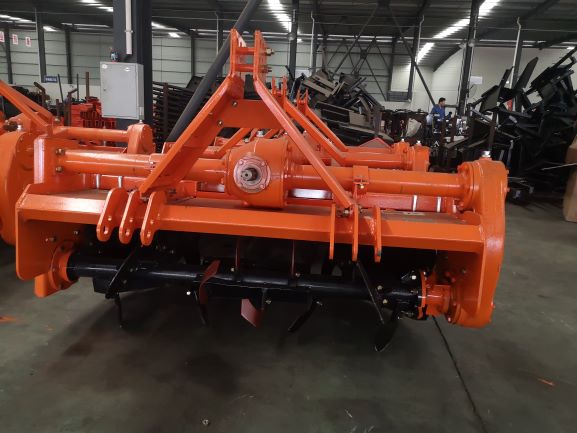 If you have any questions, please contact us directly. Crawler tractor for agriculture are produced by Hunan Nongfu with high quality and good appearance.

welcome you can visit our factory for inquiry, please send mail directly to us.