With the rapid development of the battery industry, major battery manufacturers at home and abroad have invested a large amount of money and R & D personnel to develop large-capacity high-energy-density power batteries based on small-capacity batteries. Lithium batteries are widely used in electric vehicle automotive energy systems, aerospace power systems, solar photovoltaic power systems, etc. due to their high operating voltage, small size, light weight, no memory effect, no pollution, low self-discharge, and long cycle life. in. The detection and formation of the battery is a key process in the production and use of the battery, which is related to the quality and quality of the battery, and directly affects the production cost and service life of the battery.

The overall structure of the system is shown in Figure 1. 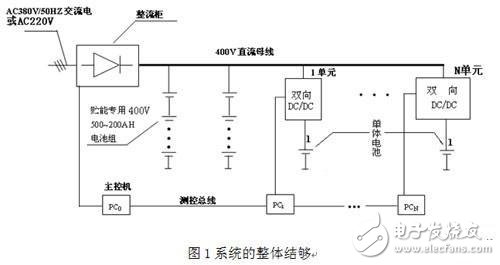 It is mainly used for initial charging and daily supplementary charging of energy storage battery packs.

It is used to balance the impact of the charging/discharging process between the various forming units on the 400V DC busbar (similar to the effect of the pool), which can be composed of lower cost or different types of batteries.

When the battery unit is charging, the DC bus power supply is taken in units for charging. During discharge, the DC/DC transducer converts the energy of the single cell into energy above 400V, charging the energy storage battery pack through the bus. The DC/DC unit is the latest high-frequency high-efficiency module with an efficiency of 94~96%, which can save energy loss caused by discharge process by about 90~93%.

PC1 to PCN are used for operational control and data acquisition of each formation/detection work. PC0 is the main control machine (may be several) used for the management of the entire production workshop, and the simulation control of the working conditions between the work is carried out to ensure the smooth flow of the entire production process, and the data processing is saved and filed.

When a single battery is charged, energy is supplied from the grid, and the battery is subjected to constant current charging through a rectifier cabinet and a chemical conversion module (bidirectional DC/DC); when discharging, the energy of the battery is converted into a module (two-way DC/DC) for the energy storage battery pack. Discharge

A more important advantage of the system is that multiple batteries are simultaneously formed, some of which are charged and some are discharged. A DC bus is designed for this purpose to connect the rectifier cabinet to several compound modules (bidirectional DC/DC). In this way, the energy can flow between different battery cells through the DC bus, avoiding the separate design of the circuit for returning energy for each discharge module, which can improve the efficiency of the entire device and reduce the equipment cost. In addition, under the control of the control system, the energy balance control strategy is adopted. By controlling the working time of different charging and discharging modules, the charging energy is equal to the discharging energy as much as possible, and most of the energy flows only between the DC bus and the single battery. Through the power grid, the energy converted from the grid and the energy stored in the energy storage battery pack balance the energy difference between the charging and discharging, which can further improve the efficiency.

The voltage of the DC bus is selected as 400V. The main purpose of the high-voltage DC bus design is important for the formation module (bidirectional DC/DC) and parallel connection on the DC bus. The higher the DC bus voltage, the smaller the line loss, but not too high. Failure to do so may result in difficulty in selecting power electronics and a problem in that the bidirectional DC/DC voltage ratio or step-down ratio is too large.

A CAN communication network is used between the control system and the conversion module (bidirectional DC/DC) and the rectifier cabinet. Currently, CAN networks are widely used.

The types of Control Switches are: