In recent years, with the rapid development of the information industry, information services and Internet applications have shown a spurt and diversified development trend, prompting the rapid expansion and upgrading of the functions and scale of broadband network infrastructure. According to the second edition of China Broadband Rate Report released by the Broadband Development Alliance, the average download rate of China's fixed broadband Internet network in the second half of 2013 reached 3.53 Mbit/s (451.84 kByte/s), compared with the first half of 2013. The average download rate and network video download rate of Chinese broadband users increased by 20.4% and 75%, respectively. On the other hand, according to the latest statistics of the Ministry of Industry and Information Technology, in January 2014, the number of fixed broadband access users of the three basic telecommunications enterprises increased by 2.264 million, an increase of 77,000 over the same period of the previous year, with a total of 191 million. The broadband access rate continued to increase. The proportion of broadband access users above 4M accounted for 79.9%, among which FTTH/O (fiber-to-the-home/office) users reached 43.137 million, and the proportion of broadband users increased to 22.6%. According to the "Informationization Development Plan" previously issued by the Ministry of Industry and Information Technology, by 2015, there will be more than 270 million fixed Internet broadband access users in China, of which more than 70 million will be installed in the fiber.

The rapid development of FTTx (fiber access), in addition to the rapid growth of high-bandwidth demand business and the implementation of the "Broadband China" strategy, depends more on its own technological advantages. Due to the use of XPON (Passive Optical Network) technology, FTTx eliminates the use of amplifiers and active devices in the network, significantly reducing network equipment installation and maintenance costs while also improving network reliability. Therefore, as an ideal way for access networks, FTTx is showing a rapid development trend and is increasingly becoming the ultimate development direction of broadband access.

However, the widespread use of fiber access and the consequent large-scale application of PON equipment have also made telecom enterprises put forward higher requirements for product quality and operation and maintenance costs of PON equipment. It can be said that the performance of PON equipment is good or bad. Directly related to the stability of the network and the quality of service.

As a professional enterprise engaged in network construction and maintenance business, domestic communication service companies attach great importance to the construction and operation and maintenance quality of their networks. How to properly test the XPON system to ensure network performance and quickly discharge equipment failures has naturally become The focus of its attention. In response to this demand, as the main supplier of communication test equipment in China, Xintai Technology provides a complete XPON system test solution for a number of communication service companies represented by Zhejiang Communication Service and Qinghai Communication Service, for accurate and efficient verification. The tested device performance and fast location fault points provide a complete method, which provides effective support for high efficiency and low cost network operation and maintenance.

The structure of the XPON system test scheme is shown in Fig. 1. The PON system is composed of a central office OLT (optical line terminal), an ODN (optical distribution network), and a user end ONU (optical network unit), and is a single-fiber bidirectional system. In the downstream direction (OLT to ONU), the signals sent by the OLT reach each ONU through the ODN; in the uplink direction (ONU to OLT), each ONU sends a signal to the OLT at a specified time. The ODN consists of passive optical components such as optical fibers and passive optical splitters, providing optical channels between the OLT and the ONU. 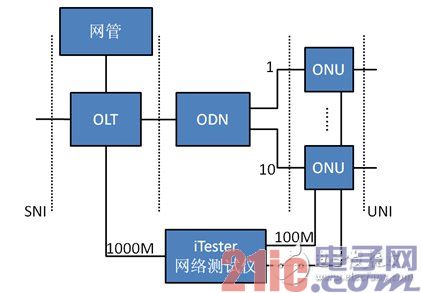 This test program is designed based on the relevant verification schemes of Radio and Television and the extensive practical test experience accumulated by Xintai Technology, which can be well matched to the actual test requirements of equipment manufacturers and operators. The whole solution can be divided into two parts: network basic performance test and test for PON products.

The structure of the network basic performance test scheme is shown in Figure 2. The system under test includes 1 OLT and 10 ONUs, and each OLT and ONU are connected to the tester. Each ONU only needs to provide one port to connect to the iTester network tester port. A 20km disk is connected between the OLT and the optical splitter. 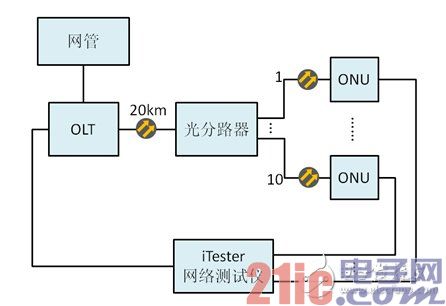 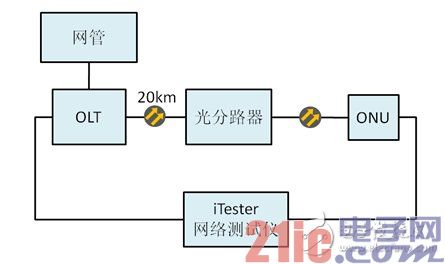 The test of the network topology of the XPON system OLT+ODN+ONU by the iTester test platform is realized by the port convergence function in the test software. Assuming that the system under test is built by one OLT+1 ODN+10 ONUs, the test system needs to be configured with an iTester chassis + 3 4-port 10/100/1000M test modules. The tester and the system to be tested are configured such that one port of the tester is connected to one GE port of the OLT, and then the other 10 ports of the tester are respectively connected to the electrical ports of different ONUs. The physical connection is shown in Figure 4. 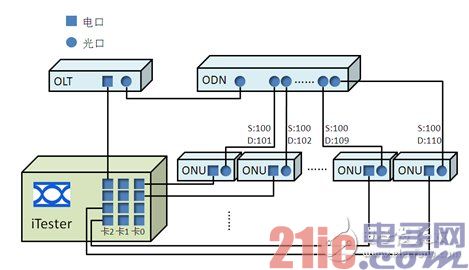 For different scale PON products, the test platform can choose two different chassis according to the system scale and port number, iTester6000 or iTester12000. With GT5001 module, it can build 4 to 48 port test system.

iTesterWindow can configure the traffic type generated by each port (based on the PON's OLT and ONU mapping), and complete the test configuration and manual test.

iTesterATT can perform automated testing and is mainly used for large-scale production testing of products. Compared with the manual test, the test efficiency is improved by 6 times. Since the test process is automatically executed by the software and the manual intervention is reduced, the test efficiency is greatly improved, and the false test rate and the missed test rate are also significantly reduced, and the test system is improved. Reliability can effectively prevent defective products from entering the market. iTesterATT uniquely created the function of recording test results for each object under test, and saved it as a log file by date, providing data support for QA to improve product quality.

At the same time, for the testing of PON equipment, iTesterATT also provides the original automatic convergence convergence test method of Xintai, which can significantly improve the testing efficiency of PON equipment, so it has been widely used in the field of PON product testing. The iTesterATT software interface is divided into a test system control area, a test system status display area, a test flow setting area, and a test detailed information display area. As shown in Figure 5.

In the convergence mode, the throughput and packet loss rate of the PON system in 64-byte, 512-byte, and 1518-byte packet lengths can be tested by iTesterATT. For the initial equipment, it is recommended that the test length of each package length be about 3 minutes. Subsequent tests can gradually reduce the test time according to the maturity of the product.

In addition, if it is for the development phase of the test, you can also use the iTesterAPP software to perform the RFC2544 test.

The above tests can effectively guarantee the performance requirements and reliability of the PON system and meet the implementation and operation requirements of the PON network.

With the full implementation of the â€œBroadband Chinaâ€ strategy, fiber-to-the-home is accelerating the deployment process at an alarming rate. With its extensive experience in Ethernet testing, Xintai Technology provides effective protection for the network infrastructure construction and operation and maintenance of many communication service companies such as Zhejiang Communication Service and Qinghai Communication Service. Its BigTao series and iTester series test platforms have been widely used in all aspects of Ethernet industry chain such as R&D, production, installation and maintenance. As the leading manufacturer of Ethernet testers in China, Xintai has been committed to providing high-quality, low-cost and high-efficiency testing services to related industries, and has cooperated with related companies to provide strong support for the construction of a solid information highway.