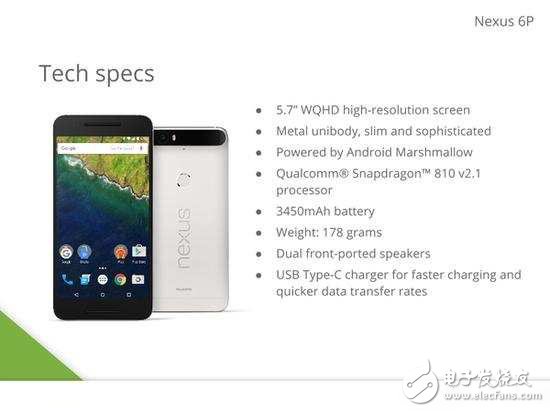 In the early morning of September 28th, according to informed sources, Google will hold a new product launch conference in the US on September 29th (Beijing time on September 30th at 2am). At the press conference, Google will update Chromecast TV stick and Android. M official version and two Nexus devices. One of the low-end machines is the 5.2-inch Nexus 5X, which is manufactured by LG. The other high-end machine is the 5.7-inch Nexus 6p, which is manufactured by Huawei.

It is understood that Nexus 6p will be the first to be listed in more than 30 countries and regions such as the United States, Canada, Hong Kong, etc. This also means that Huawei will use this as an opportunity to enter the US market.

In terms of appearance, the Nexus 6p is an all-metal body made of aerospace-grade anodized aluminum. It is available in black and white and silver. In addition, the online version will be exclusively available for the Japanese market.

For Google, although the sales of the Android camp is far greater than Apple's iOS, one of the challenges facing the Android system is splitting. Each manufacturer has its own customization, and there are a variety of devices that will cause the Android system to become more comparable. Complex and huge, and less efficient, Google's reason for launching the Nexus series is to create the best Android software and hardware experience, so you need to find a strategic partner to optimize the operating system and hardware experience with it, Huawei It is the first domestic mobile phone manufacturer to be selected as a foundry of the Nexus series.