Maoshuo Power said that 2014 was a crucial period for the company's strategic development and industrial layout. Due to fierce competition in the industry market, rising labor costs and increased factory rents, gross profit margin declined. At the same time, the company raised funds for investment projects. The Huizhou plant was completed and put into operation, the fixed assets investment increased in the early period, the asset depreciation expense increased, part of the capacity relocation, product upgrading, inventory disposal and provision for impairment of assets affected the profit and loss; in addition, most of the newly established subsidiaries of this year are starting to take off. At the stage, the initial expenditures will affect the company's profits; in summary, the company will suffer large losses.

In terms of LED drive power business, Moso Power's revenue in 2014 reached 184.68 million yuan, a year-on-year decrease of 17.01%, and the gross profit margin was 20.59%, down 8.53% year-on-year. The relevant person in charge of Maoshuo said that in 2014, the LED drive power supply E6 and G6 series were developed to realize the upgrading of the products;

In 2014, with the rapid start of the domestic LED lighting market, LED drive power as a supporting industry for LED lighting, has also ushered in a period of rapid development. But with the addition of new capital and some traditional power companies, the LED power market is increasingly competitive.

The price of LED power supply has dropped sharply. The reasons are: first, the impact of low-quality and low-priced products, some manufacturers launch price wars; secondly, the competition in the industry is intensifying, high-end manufacturers squeeze their profits and reduce the gross profit of products for market share. Then, with the advancement of technology and the gradual maturity of the market, the products enter mass production, the cost is reduced, and the price is reduced.

â€œThe net profit is getting lower and lower now, and there is no improvement.â€ Wu Jianwei, chairman of Rungelai, told the reporter of â€œHigh-tech LEDâ€ that although Rungleâ€™s sales volume is rising, the price is basically 20% per year. -30% decline.

In the case of Leyford, in 2014, the unit price of the company's power products fell significantly, sales increased by 20% -30%, but followed by a 5%-7% decline in product gross margin.

Maoshuo Power also admitted in the annual report that due to the decline in prices, the gross profit margin declined in 2014.

For the LED driver power supply market in 2015, Moso Power believes that 2015 will be a year of changes in the LED lighting industry. The Chinese LED market has changed from technology-driven to application-driven, and the LED lighting market has opened up and demand has expanded exponentially. At the same time, the high development of the industry has also led to further concentration of investment and integration of active resources. The integration and acquisition of the LED lighting market has become more frequent, the strategic intentions have become more diversified, and the advantageous resources have been further concentrated in the industry. The accelerated integration of the industry makes the LED market expected to push the industry into a new cycle. With the relative maturity of the market, the competition of enterprises has changed from the initial technological competition to the comprehensive strength of scale and cost. The entire LED industry presents a pattern of strong demand and fierce competition.

â€œMao Shuo Power has entered the new energy field. It has invested in and acquired companies such as Maoshuo New Energy and Maoshuo Electric, and has comprehensively deployed new energy vehicles such as new energy vehicle charging piles and urban construction solar energy. Maoshuo Power has grown into a power supply for lighting. The company of R&D, production and sales of new energy products such as adapters, LED intelligent drives and high-power UPSs.â€ Gu Yongde, chairman of Maoshuo Power, said at the 2014 annual meeting.

As it moves throughout your home, Mopping Vacuum Robot can clean wooden floor, PVC floor and tile floor. Robot mopping vacuum use the artificial ground cleaning method to transfer the center of gravity of the body to the rag, to achieve Mopping Robot vacuum more powerful and clean. Specifically, Wet mop (remove stubborn stains) and dry wipe (wipe hair crumbs) are flexible to choose because of water tank.

Why you choose it?

(3)Intelligent anti-collision and anti drop, a more suitable robot floor cleaner for you. 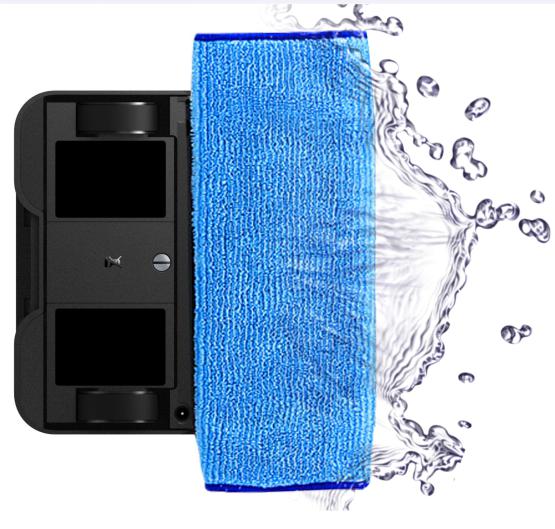